Try this:
Use this for truncate sqlite table in android.
this command  1st delete all from table but Auto-increment Primary key field is exist that reset  2nd command . Totally  You get truncate table. like =  truncate 'table_name' ;
at 6:27 PM No comments:

Try this:
Use this for truncate sqlite table in android.
this command  1st delete all from table but Auto-increment Primary key field is exist that reset  2nd command . Totally  You get truncate table. like =  truncate 'table_name' ;
at 6:25 PM No comments:

In some situations, we want to send sms messages from our own Android application. There are two different ways to do such a thing:
The use of SmsManager facilitates the sms sending because it gives us the opportunity to customize this functionality with the manner we want, within our own Activity. In parallel, the use of Intents implies the use of built-in applications and sms clients that are installed in each Android device. In this example, we are going to implement both ways. More specifically, we are going to send a sms by using SmsManager and implicit Intent withSENDTO action and/or VIEW action.
2. Create the layout of the Main Activity
We will put two EditTexts so that the user can fill in a phone number and a message for a SMS. Also, we are going to add three different Buttons, that each one enables a different action and uses a suitable class (smsManager, Intent withSENDTO action, Intent with VIEW action).
Open res/layout/activity_main.xml and go to the respective xml tab. Then paste the following.
activity_main.xml:

SmsManager handles SMS operations and getDefault() method should be called, in order to get an instance of this object. For the intent with ACTION_SENDTO we have to define the data as smsto: and the phone number added at the end. Respectively, for the intent with ACTION_VIEW we will define the type as vnd.android-dir/mms-sms, so only sms-mms providers will launch. Also, we have to add the phone number and the message as extra fields to that intent.
Open src/com.javacodegeeks.android.sendsmstest/MainActivity.java and paste the following.
MainActivity.java:

To run our application, right click on our project → Run as → Android Application. The AVD will appear with the app loaded.
Fill in a phone number and a message in order to send a sms, as shown in the picture below. 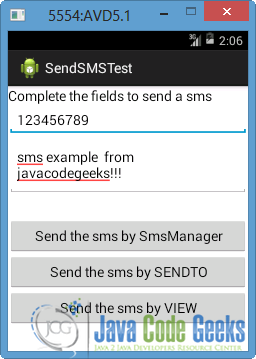 Lets press “Send the sms by SmsManager” button. The sms will be sent via smsManager, so a Toast will appear which certify the success of sms sending. Otherwise, an error message would be appeared. 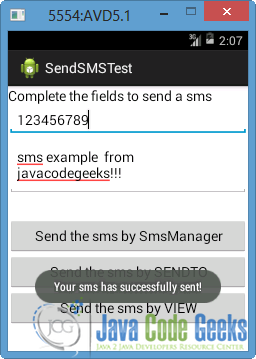 Now press the “Send the sms by SENDTO” button. If more than one applications, that use a SENDTO action exist, the user will choose one of the displayed ones. For example, our emulator contains an application that uses an implicit intent withACTION_SENDTO, as shown in the picture. 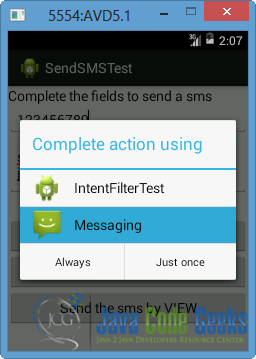 Lets choose the default Android app for sms. As you can see in the picture below, the fields are completed with the elements that the user gave previously. 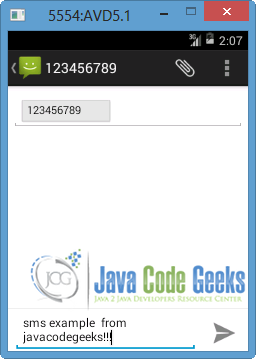 Finally if we press the “Send the sms by VIEW” button, the device’s Built-in SMS application will launch with the appropriate fields filled in, same as shown in the image above.

How to make a phone call in Android